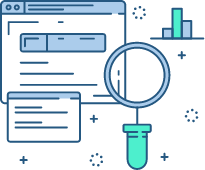 Similar to site migrations, site mergers and rebrandings are usually problematic for businesses. Whether it’s a large corporation or a burgeoning startup, changing urls without comprehensive redirects and missing migration steps can result in a dramatic drop-off in site traffic. That being said, the risks associated with traffic loss and the time it takes to recover from them can be mitigated with careful planning and testing. In fact, data-driven experimentation is necessary for successful site mergers that minimize SEO impact.

A tale of two migrations

One of our clients had this issue in a two-fold way. Petals, a designer artificial flower and plant vendor, came to us several years ago with the need to move from their old brand URL (www.silkflowers.com) to their new rebranded name. To complicate matters, the company also managed another site–Office Scapes Direct–that we would later need to integrate into the Petals site. There was a lot of overlap and redundancy, and the rebranded move and the then integrated move was certainly risky from an SEO perspective. In the SEO world, there are no protocols for how to merge sites consistently with success, so we knew we had to be strategic and systematic in order to pull it off.

With the first move–the rebranding–their URLs were not changing, other than the domain. In order to minimize the risk of the move, we completed an extensive checklist of changes. The most important component was to add redirects from the old site’s URLs to the corresponding URLs on the new site to transfer the ranking signals. Then, we measured the impact in week intervals. As we expected, there was an initial drop in organic search for the rebranded site, but we quickly saw that level off as Google and other search engines began to prioritize the new domain.

We originally recommended splitting the rebranding and the integration of the sites, so last year, a few years after the successful rebranding to Petals, Chris Corelli, the co-CEO and Managing Director, decided he wanted to proceed with merging Office Scapes Direct. They also wanted to assess the impact on their overall traffic before the official move.

Our cross-domain canonicals signalled to search engines that the Petals.com pages should be recognized as the primary version of the other site. We applied the canonical tags gradually in a few batches, prioritizing the pages with organic traffic so we could see results quickly. As we experimented and looked at the data, we had to ask ourselves two primary questions: 1) Did Google find the canonical tag and drop the original page from the index? And 2) Is the traffic to Petals.com staying at the same level as the two sites combined? This data helped us make informed decisions about timing and SEO. When the sites recently merged, we initially saw mitigated impact to site traffic and, in the end, we are seeing ongoing improvement.

This company’s first move was a branding one, and the second was logistical–accordingly, RankSense had to approach both the migration and integration with nuanced and careful experimentation. Nothing is guaranteed with SEO, but there are ways to anticipate problems with informed strategies. SEO can make or break a business because 30% or more of site traffic could depend on it. At RankSense, we are conscientious but innovative in our approach because we believe data-driven experimentation can ultimately discover new effective SEO strategies.